My life in California was pretty predictable.  Every morning I would wake up, wake Maree up, go down stairs and outside to do my business.  Then there was breakfast followed by either a walk or the dog park.  I was very lucky because there was a nice dog park for little dogs almost across the street where I got to play with my friend Louie, pictured with me here.  So, life went on day in and day out.  That is, until Jim and Maree decided they were moving back to their house in Italy.  This changed everything,  Well, I still went to the dog park and played with all of my friends every day, but there was a change in the air, and a lot of activity around the house.  There were boxes everywhere, and we kept going to strange places to mail things and get fingerprints or to try to get something called a visa.  I hated the visa trips into San Francisco.  All of that up and down and stop and go always made me sick.  And, I must admit, that I am not a city dog -- or at least not that city.

Finally, one day, suitcases were packed and we were leaving the house.  We went to another house not far away that was something called an AirBNB.  We had to move to a temporary house because we sold our home.  Everything was on track to leave California in late September until Maree noticed the requirements for me to enter Italy.   I needed to have another rabies shot and wait 21 days, so we would be homeless for a while.  All of our plans changed then.  Ultimately, we found a nice house in Benicia  with a great yard and views, but it was not our home, it did not have our smells, and there were no dogs to play with.

After a week in Benicia, we went to stay with Maree's friend in her guest house in Sonoma.  I really liked it there because I got to play with her dog, Honey.  Honey would come and bark at the door in the morning and we were off to run around and wrestle.  That is what I like best the chase and the wrestling.  Honey, was also very cute, and I think I found my first love.  But, alas, it was short lived as we returned to the house in Benicia for another week.  This is crazy, right?

All of this moving was rather confusing to me, but little did I know what else was to come.  One morning I woke up to more chaos than usual.  Bags and boxes were being packed with great urgency.  We had to go off to the bank because someone hacked our bank card whatever that means.  Then we tried to mail a big box of stuff.  It cost so much, we did not do it.  It really did not matter so much to me as there was nothing of mine in it.  Finally, after running here and there, we went to Brian's house.  I got to play with his little boys for a while, then it was back in the car.  Little did I know then that life as I knew it was coming to an end.

It took more than an hour to arrive at the place they called an airport.  This was the biggest and busiest place I had ever seen.  When we finally arrived there, we just went to stand in one line and then another.  After putting our bags up on this belt like thing, we walked through a weird machine.  Maree took off my collar and harness first and carried me through, so that was not too bad.  But I am still wondering what that was all about.  It seemed like much ado about nothing - sorry Shakespeare.  I still have not figured out what that machine was or why everyone queueing up to go through seemed to be in a hurry and rather stressed out.  I could feel the tension in the air.  I kept looking around me to see if there was danger lurking around the corner.  I was on alert, but I was not sure why.  Some people in a uniform took one of Maree's bags to check it out, but apparently it was okay.  Did they think it was broken and they wanted to fix it?  Maybe they wanted to steal some of my food and treats that were inside.  If dogs ran the world, it certainly would not be like this.  We don't believe in lines and queues.

Anyway, after walking for what seemed like miles, we stopped for some late dinner (I had treats) and then we walked to what they called a boarding gate.  We were somewhat late in arriving as many people had already gone through, but they made us go to another line to check all of our papers - again!!  Finally, we were allowed to proceed down the little narrow hallway to the plane?  What is a plane I asked myself?  When I saw that little cabin door, I panicked.  I was not going in there.  I planted my feet and pulled back on my leash.  Well, I really had no intention of going in there, but Maree scooped me up and carried me on board.  That is the problem with being my size, you can't always get what you want.

Being on the plane made me wonder about people.  Why would anyone want to be in this small space, packed in with so many people none of whom they know and none of whom seem too happy to be here especially at 11:00 pm.  I tried to figure out why we would go to this place where I had to sit for hours in Maree's lap.  I am still not exactly sure the purpose of this airplane.  I don't think it was a time machine.  But it didn't seem like we were going anywhere like in the car.  At least my stomach did not feel it.  But, when we got out, we weren't in San Francisco any more.  Maybe it is a transporter.  Maybe they beamed me up or down or somewhere else.  I heard an announcement say we were in Philadelphia.  I have no idea where this is, and people speak English but it sounds different to me.

In this place called Philadelphia, I spent my first night, or part of one,  in a hotel.  I wondered who would want to live in these tiny rooms where you have to be quiet even though obviously there are people right outside your door and it is your duty to bark at them.  Who knows what evil they may be thinking of pursuing.  Fortunately, we were not in the hotel for long, because we were back to the airport for yet another flight, and this one was even longer.  From what I heard Jim say, we were on our way to Rome.  I thought roam meant to wonder around, so I thought this might be okay.  I like roaming.  But I found out that was not what they were talking about.

While my time on the airplane was long and particularly boring,  I was the perfect passenger.  I never made a sound. And I never whined and cried about having to use the facilities.  Well, there were apparently no facilities for me to use as I saw no grass or fire hydrants.  Actually, I have never peed on a fire hydrant and I can't understand why people think these are things for dogs to pee on.  In the San Francisco airport when we went to the "doggie relief" area, they had fire hydrants.  I was not about to do anything there and I wondered if any of my four legged friends ever did, but it did smell like some might have.

Maybe my behavior on the plane was tempered because I was a little afraid of those people in uniforms marching up and down the aisle and asking if you wanted something.  All they gave me was water, and it was tepid.  And, they never even asked my name or gave me any pets.  This was really strange because I usually get a lot of attention everywhere I go.  I got the impression that they did not really approve of me being on their plane.  Well, in truth, I didn't want to be there either, but I did not have a choice.  No one said, "Hey, Dino, do you want to move to Rome"?
After nearly 9 hours on the plane, none of which I spent roaming, I finally arrived in that place called Rome.  As I disembarked from the plane, I immediately knew that life as I knew it had changed.  And this was the start of a big adventure. 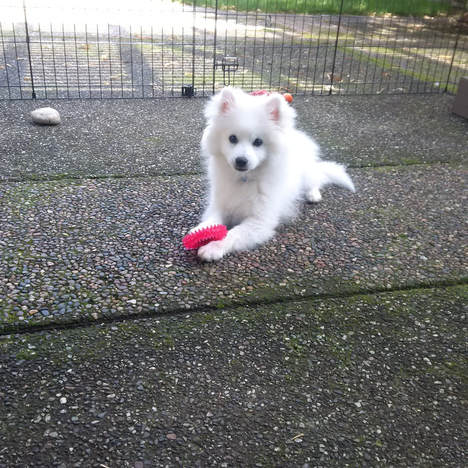